This has been kicked around before in a couple of places, but I would like to formally propose it here.

The basic idea is that we create a separate DB for history and audit purposes. The name of the db with be the same as the normal one, just with _chg appended to the name.

What happens is that when a INSERT,UPDATE or DELETE operation happens in the normal DB, a trigger is fired that backs up that data to the History DB.

It’s possible to generate the triggers based off the schema so we shouldn’t have to write those out by hand.

There is a performance hit to doing this, but if a query ever goes wrong, this makes it possible to fix just the mistakes that were made.

Default to null should not be needed. The data will be the same, whatever it is.

I am not so sure it should be a separate DB. The problem with a separate DB is that there are normal functions - e.g., viewing Edit History of a Q or A - that will require access to these tables. With the names different (_chg at the end or History at the beginning or whatever - arbitrary and doesn’t matter as long as it is consistent), there is no reason the tables can’t be in the same DB.

As noted before with other things, this would be Date/Time.

Also one other change: The “Id” will be different. There are at least two ways to do this:

Advantage: References between Original Table and History Table will have Id refer to the same thing (Autoincrement Id of the Original Table).

but if a query ever goes wrong, this makes it possible to fix just the mistakes that were made.

My concern from immediate-glance is that if some sort of concurrent change occurs, then the audit log, as written out, might be even more inconsistent (especially since updates turn into two rows); this would be especially bad since different DB implementations might handle consistency around triggers differently. I’m guessing that it would take some specific tweaking in the database layer to make it work for each DB backend.

Of course, if there’s a human in the loop, they can probably disentangle the audit log based on context.

If the DisplayName of a user get’s changed, then I don’t see the point or storing their Bio again. I have seen systems where on an update recorded all the values of that row and in addition to taking up way more space, it makes it difficult to see what changed. Setting the values to default to null means that if the update doesn’t change the value of a column then that value is set to null.

I would have the ChangeTable be its own primary key and call it something else. HistoryId or something.

If the DisplayName of a user get’s changed, then I don’t see the point or storing their Bio again. I have seen systems where on an update recorded all the values of that row and in addition to taking up way more space, it makes it difficult to see what changed.

Yes, it takes more storage. Storage is cheap. As far seeing what is changed - that isn’t easy if you are browsing rows of a table. But it is trivial for software to highlight the differences for you - much as (and easier than) a diff program shows differences between two blobs of text.

Setting the values to default to null means that if the update doesn’t change the value of a column then that value is set to null.

But the flip side is that:

Storing data, however, writing data to disk takes a hit out of your performance. If data doesn’t need to be written, why write it.

In the update before it will be null, and in the update after it will have a value. The if statement does need to be null safe.

If you want to recover the complete contents of a record at a given point in time (e.g., high-ranking user (no approvals needed for edits) deliberately messes up a bunch of posts (shouldn’t happen, but I’ll bet it does…) then reverting is more complex than if all data is in every history record.

100% correct. If the changes aren’t done the system breaks (ask me how I know). This will be true regardless of whether the tables are in a seperate DB or not.

There are going to be lots of rows in the history table, indexing whether the operations was a INSERT/UPDATE/DELETE, who did it and when it happened makes rolling back changes much faster.

I’m probably missing something fundamental here, but it sounds like you’re describing a backup mechanism? Why build a second DB and code to handle it when B/R is standard database functionality?

It’s not for backup and replication, what it is for is tracking changes. It can be used to back up and I have used this system to undue deletes but that’s not really for backing up.

For instance, if someone changed their display name, then it would record the old one. If they change it multiple times those are all recorded.

Broadly this makes it possible to undo a single update or delete of any single record instead of having to pull up an backup that may not be up to date.

Oh, I thought edit history would be in the main DB, because it will often need to be available (like when showing post edit histories). This would also allow mods to roll back a problematic change of display name instead of hard-resetting it.

Here is why I would like the backup tables in a separate DB with a picture. See how the tables are listed on the left side? 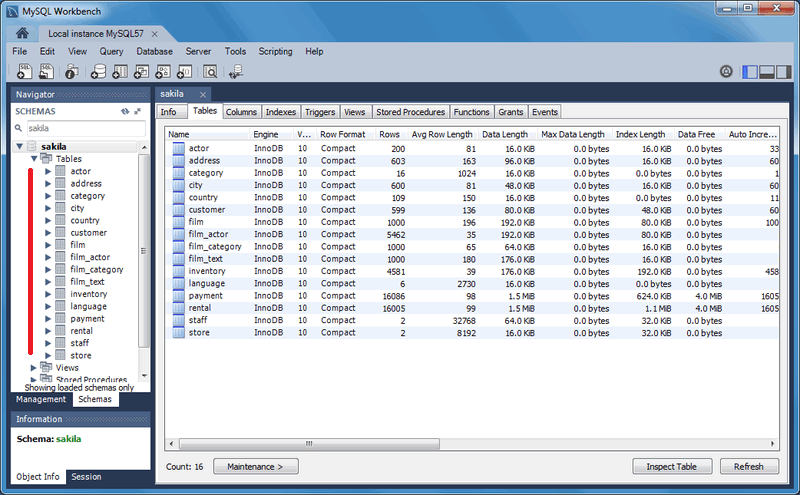 If you put the history tables in the same place, you double the list of tables to scroll through and most of the time when you are working on it you only care about the actual tables.

It’s the biggest showstopper in the world but putting the history tables in their own DB has made my life a lot easier in the past on some of my other projects.

It seems odd to change high-level DB structure to accommodate an IDE. It makes me wonder why the tool can’t do better, or whether it can be used differently.

It looks like postgres does things differently from MySQL (which is what I am most familiar with), but from a cursory reading, it does look like a separate schema would solve my concern.

I’m still not convinced. Another possible issue: Foreign Keys. If they are in the same DB then:

with 2 separate Schemas/DBs (however that is defined, not my usual thing which may be part of my reluctance);

As far as @cellio 's naming convention, there are 2 ways to go:

I do not agree with using a separate database for auditing. I’ve been handed systems like this before and it wasn’t pleasant.

Triggers are evil. They’re awesome, too, sometimes. Here’s why I wouldn’t recommend triggers:

Performance
Triggers firing each time records are inserted or updated will lead to system performance issues, especially on heavy load. There’s a cost associated with this, which shouldn’t be the basis of an entire system’s auditing.

Maintainability
A trigger here, a trigger there, a trigger that triggers another trigger - oh my. Triggers can get confusing and get out of control. Over time they’re tough to maintain when used liberally.

If we can draw a domain around what we’re building, we can nicely tailor our platform and design choices with a narrow scope. User Profile domains might not need anything special - have a few endpoints to PUT updates and call it a day. Posts / Answers domains however may need something like an event sourcing style system where the data is immutable. Storage is cheap these days. What you will potentially encounter is dealing with performance - which can be solved when it’s needed.

I’m not saying Event Sourcing is the best decision here, but I’d recommend looking at the pattern or other auditing patterns.

100% agree with - based on experience (with my own databases and others):

As far as “what needs an audit trail”:

I have gradually been pulled over the years - through hard-earned experience - to the idea of auditing “almost everything”. The exception is not so much “what do I think we don’t really need” to “what tables are just so huge as to be impractical to audit” and also, sometimes, “are there ever any real changes to audit”. Some specifics:

In our current proposed schema (including variations for reference tables vs. lots of little fields, etc. - that makes little overall difference), the result is that I would audit pretty much everything, including User, Community, Post, Comment, UserCommunity, Tag, etc., including Instance, Community, User and Post specific details (all the reference tables, linked tables, etc.) except:

There may be other exceptions, but not that I can think of at the moment.

SQL Server 2016 introduced temporal tables. I am not familiar with PostgreSQL but I just did research and found PostgreSQL temporal tables extension. I have no clue how good / performant / maintained / etc. that extension is. Just putting it out there, maybe somebody else knows.